Know the emissions and inspections standards in Utah? That’s great—but what if you ever move? Regulations vary from state to state, and even city to city, so it’s advisable to have an idea of where you stand. Take a look at the general emissions standards at a national level to find out just what kind of measures are being taken to go green. It all starts with regulating hydrocarbons, which are created when fuel doesn’t burn or partially burns. If that gets into the atmosphere and mixes with sunlight or nitrogen oxides, it becomes a big creator of ozone.

At the ground level, ozone mixes with other gases to create smog. It’s what causes air pollution 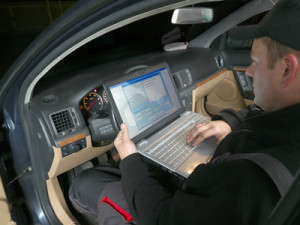 and maybe those allergies. It can bring on asthma attacks, damage lungs when present in heavy quantities and some studies have even linked it to cancer. The most hydrocarbons your vehicle can release is 0.156 g/mi. If you have an ultra low emission vehicle (ULEV), your standard is 0.055 g/mi.

Nitrogen oxide levels also have to be kept low. It’s formed via oxygen and nitrogen atoms mixing together in a high pressure environment—like your engine. Nitrogen oxides are the primary cause of “acid rain” and can also create ozone in certain atmospheres. You’re allowed 0.6 g/mi or 0.3 g/mi for a ULEV.

Then of course there’s carbon monoxide, which is invisible, odorless and deadly. The latter is because it decreases the amount of oxygen that gets to your brain. It can be created when fuel isn’t properly oxidized—that’s when it transforms into carbon monoxide and can kill in seconds. You’re restricted to less than 4.2 g/mi or 2.1 g/mi for a ULEV vehicle.

Carbon dioxide is the primary cause of greenhouses gases, and it’s what’s heating up the earth. It’s produced sometimes even when your car is in perfect working condition and all fuel is burned or oxidized. Simply put, carbon dioxide happens and there’s no way to really regulate or lower it. However, if there are other issues, you’ll likely fail from other gases and carbon dioxide will naturally get lower as repairs are made.

Finally, there are evaporation emissions. This is what transpires when fuel evaporates. This often happens on hot days when the gas in the tank gets warm. Gas vapors are released to reduce pressure, and that fuel is vaporized as you drive. Once you’ve been on the road awhile, the engine cools down as long as it’s working well. You have to stay under 2.0 g/test for one hour of a “hot soak.”

These are just the national guidelines—you may be required to undergo even more testing. Routine maintenance can help your vehicle pass, but make sure you also keep up to date on what’s required for an A+.